What's your relationship with turtles?

Do you ever think about turtles?

Do other people ever make you stop and think about turtles?

What do you think about turtles?

Why am I thinking about turtles when I should be planning a ski trip or a trip somewhere warm with a beach?!

It's time to get this thing with turtles off my mind and into a post so I can move on to other things!

So here it is, my thing with turtles! 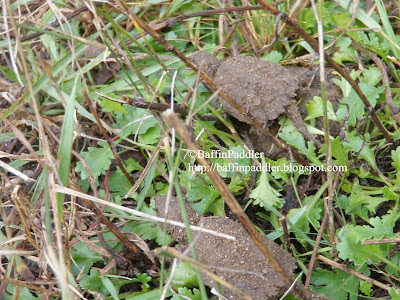 On a rainy day last September, our group of seven kayakers were headed to Big Moose Lake in the Adirondacks, New York, to paddle on a day I thought it would be much more fun to visit the Adirondack Museum!

On a steep sandy embankment along the road next to a creek, there was a gathering of about 15 people hovering around the same spot.

I thought there had been an accident. Was it a roadside vigil?

But, the people were all smiling. Someone called out: "Baby snapping turtles are being born! Come watch!"

I thought, "Do I have to? We're already heading out late for a paddle. It's just turtles!"

But the rest of the group stopped and I didn't know the way to the launch site.

So I dug out the camera, got out of the car, and hoped I could get a shot of baby snapping turtles.

Oddly enough, it's this 50 baby snapping turtle tale that finally made me think about turtles and all the turtle stuff I've been seeing and hearing about as a paddler over the years.

When I took this picture of the snapping turtle nest, I thought there was only one baby snapper coming out at a time. But no . . .
Size: How big are baby snapping turtles? Their shells are about the size of a 25 cent piece, about 2-3 centimetres.

Baby snapping turtles start out small, but if they make it to adulthood they can grow to a shell size of 9 inches to 19.5 inches long or 24 centimetres, up to 50 centimetres long.

After our group of kayakers watched some of the baby snapping turtles fight their way out of the nest and run to the water, we headed off to paddle Big Moose Lake. 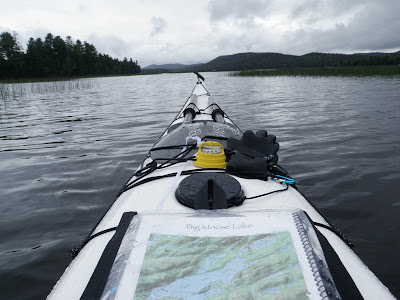 When we got back to the muddy, silty launch site at Big Moose Lake at the end of the day, a woman from the conservation group was in the parking lot and gave us the baby snapping turtle head count and news update:
"50 baby snapping turtles hatched! Well, 49," she said, "An onlooker stepped on one and fell into the creek."

But then her tone changed and she said, "That's a lot of snapping turtles! From one nest! Of course, they won't all survive."

But her comment finally made me stop for a moment, stop loading my gear, and think about snapping turtles.

What should I do if I encounter a snapping turtle and it bites me . . . and it doesn't let go right away?

I paddle in snapping turtle territories all the time. Kayak anglers (people fishing from kayaks) and fishermen fishing in creeks, ponds, shallow lake and river shorelines sometimes report seeing big snapping turtles swimming up to their boats chasing after their bait or catch. And they don't want to catch a snapping turtle! Or get an accidental bite!

Snapping turtles don't attack you. Their bites are not venomous (poisonous).

But, if you do surprise a snapping turtle, or bother one intentionally, or try to help one cross the road and pick it up (you shouldn't!) and it bites you, the advice is to stay calm.

That will be tough!

Try counting to ten and see if the turtle has let go.

If you are on land when a snapping turtle bites you, and does not let go, and you can get it into the water, it may encourage the snappping turtle to let go and swim away.

Trying to rip the turtle's strong jaw and sharp beak from your body can make things worse and tear your skin. Killing the turtle apparently makes it harder to loosen its strong grip. A dead snapping turtle's jaw will constrict (get tighter) and make it even harder to remove.

After a bite, clean the wound and seek medical attention if necessary. Good luck!

This big snapping turtle startled me when I first saw it and amazed me by its size. It's a big adult and must weigh about 35 pounds. I started to look around the narrow creek I was paddling and pay closer attention. There were a lot more snapping turtles in the creek. Not the place to dangle fingers or toes over the edge of the boat.

The stretch of Bon Echo Creek here was fairly narrow and I didn't have much room to get past the snapping turtle with all the other fallen trees. While taking a photo, my kayak quickly drifted closer and closer to the turtle, and it stayed put. Usually, turtles crawl off into the water when you come close.

But this big guy didn't budge! And I backed off. Snapping turtles can't retract into their shells like other turtles. To defend themselves, they will usually swim away if they are in or near water, or snap and bite if you surprise or disturb them.

Look at the size of those feet and claws!

The snapping turtle was happy in the sun and didn't want to move. It was watching me. It wasn't going to bother me if I didn't bother it. But, I decided to put down my camera, grab my paddle, and paddle away so I didn't drift in any closer and disturb its sunbathing. 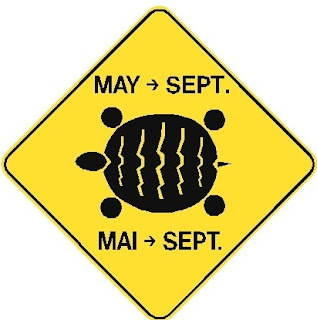 It is a pretty cool sight to see a turtle crossing sign on a highway and then see a big turtle crossing the road animated by an excited human standing in the middle of the road waving their arms wildly to stop traffic.

I've driven home from paddles and seen these turtle crossing signs in the oddest places. On country highways in Ontario, Canada where there is no water in sight. When I looked left and right of the highway, I saw a mile of fields, and then after that, a long stretch of forest.

I laughed. "Is this some kind of a joke? How could a turtle possibly travel this far to lay eggs? Where's the water? "

Apparently, female turtles can travel up to six miles (10 kilometres) to lay eggs. That's hard to believe. It's a long walk . . . for a turtle!

Then, one day, on a country highway with a turtle crossing sign, I saw a woman standing in the middle of the road, madly waving her arms. Her car was parked on the side of the highway.

A big brown spot was slowly crossing the road.

The woman was smiling and excited, "A turtle is crossing!"

Wow! People like turtles! People love turtles! They have a thing with turtles. Even snapping turtles.

I had a pet turtle twice in my life.

Turtles can have high levels of PCBs and other toxins in their flesh. Some farms raise them for consumption. Some restaurants serve turtle soup. I haven't come across turtle soup in any menus I've seen.

There are laws in many places to regulate snapping turtle capture or to protect them. Something I hadn't thought about or that I even knew about until now. I'm a paddler. I just look at turtles and snap pictures of them.

You may want to investigate laws and regulations in the area you're visiting if you're thinking of catching a turtle or making your own turtle soup.

Turtles have been around since the age of the dinosaur and have survived. Turtles biggest threats today are human activity.

For information about regulations in Ontario, Canada, you can visit:
Capture of Snapping Turtles, Fish Ontario, Fishing Regulations, Ontario Ministry of Natural Resources 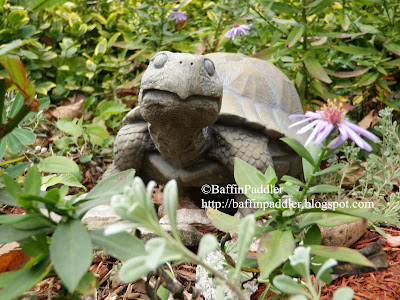 I have a plastic snapping turtle in my garden. Her job is to keep away garden pests, like the neighbor's cats. So far, it's not working! But she's cute.

You have some turtle metaphors? What are they?

What's a metaphor? It's a big word. Metaphors are the hardest and most interesting things to explore. Let's break it down.

Metaphors are simple symbols of things you come across in your life that relate to or represent other things in your life and connect you to the world if you take the time to notice. It can take years!

Confusing?! I know. When I was attending university and studying Communications, they talked about metaphors and I never understood metaphors!

Putting together metaphors is like connecting dots to yourself and the rest of the world. When you start to see life through metaphors, once in a while at least, it can be interesting, helpful, and life changing.

How about the Tortoise and the Hare, from Aesop's Fables? The swifter hare (rabbit) thought he could easily outrun a turtle. The hare underestimated the steady determination of the turtle. The turtle won the race. The arrogant hare lost. Can you relate?

When all the holiday hype or any other hype tries to drag you in, think turtle. Slow down. And give a turtle a chance.

The Durhamblogger, a paddle blogger in South Carolina, U.S.A. reminds me to, "Take life one stroke at a time."  A good motto. Especially as the busy Christmas season rings in.

For more information about snapping turtles and other turtles or to donate to a turtle cause: 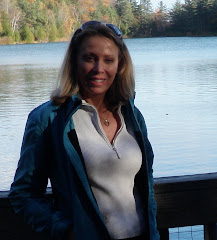 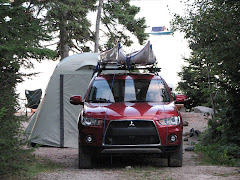 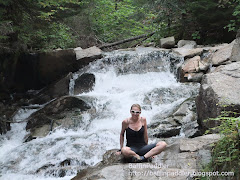 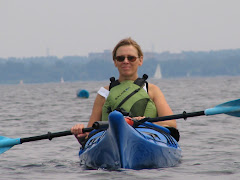