One cigarette butt contaminates up to 50 liters of water 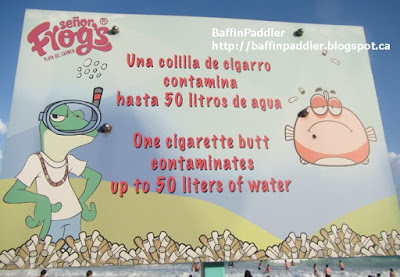 Oddly enough, the first time I saw this type of sign was on a super busy beach in Playa del Carmen, Mexico this winter. I wonder why I haven't seen more signs like this when I travel to waterways: One cigarette butt contaminates up to 50 liters of water. In Spanish, una colilla de de cigarro contamina hasta 50 litros de agua. The sign was posted by a local restaurant.

But I do know one thing, now when I make travel plans, the first thing I will look for are completely smoke-free resorts. The resort we stayed at in Mexico did not allow smoking in rooms nor in the dining areas, lobbies, gym, etc. Even though there were open areas where people could smoke, this type of all-inclusive resort that restricted smoking in so many areas did not seem to be popular with smokers.

But, the smokers are always on the beach in the lawn chairs leaving their butts behind. 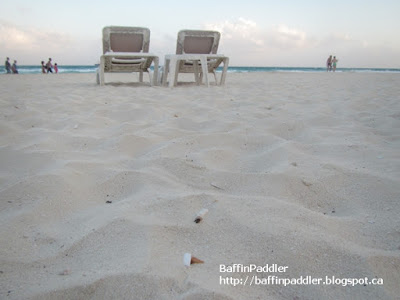 I saw tons of cigarette butts littered in the sand but spared you the messy shot. You'd rather see the beach and the ocean, right?  The resorts are constantly cleaning up the mess.

Oddly enough, with all the crowds on the Playa del Carmen beaches, I did not see one person walking along the beach smoking. No smoking on the ferry to cross over to Cozumel, and no one was smoking in the line-up to board. 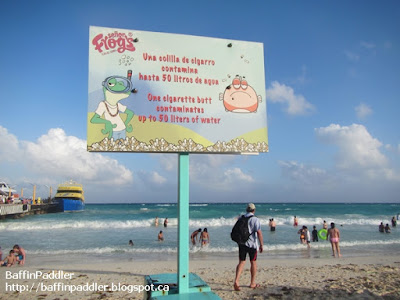 Bravo to resorts that are cleaning up by not allowing smoking. And, bravo to anyone who kicks the habit or doesn't pick it up. Now let's see when cigarettes are completely banned and no longer produced.

I won't talk about plastic on the beaches. I picked up what I saw each day in the surf zone. I was rewarded on the third day by finding a nice pair of sunglasses bouncing around in the surf. Staff clean the beaches around the resorts daily, but the wild beaches are a sad mess of people garbage. Depositing more garbage cans might help.

Poison Ivy and Your Pet! 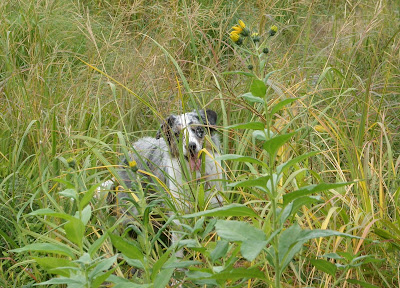 So, you've taken the doggie ashore on the mainland or an island for a little exercise. "Hey, you look so cute in the bush." The final flowers of fall are still standing. You've got to get a shot of the beautiful field of six-foot tall yellow wildflowers before they're gone. Suddenly, your early warning system clicks on and you remember to look down instead of up to see what you're tromping through on that barely there trail to the flowers. Poison ivy starting to turn red in the fall along the Ottawa River, Quebec, Canada.  Ah, ha! Of course. There are a few strands of poison ivy creeping out under the tall stuff! And you manage to avoid it. But where's the doggie? She's romping right through all that poison ivy you've just avoided and now her fur, paws and collar may be full of the oil, called urushiol , from the poison ivy plants - the oil that can cause a nasty rash if it gets on your skin, especially if you're one
Read more

The magic of camping and kayaking at Bon Echo Provincial Park, Mazinaw Rock, Ontario, Canada! Get your bug suit on! 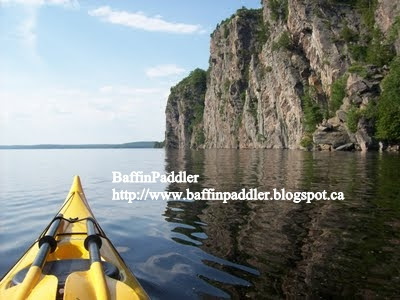 This is one of my favourite "easy to paddle" little magic spots! Bon Echo Provincial Park is in the south central part of Ontario, Canada. It's a pretty nice place to camp! You have amenites here. Even on the back country sites - where you'll have more bugs - but more privacy. Take your pick. More people or more bugs? It's hard to choose sometimes! Mazinaw Rock is on picturesque and easy to paddle Mazinaw Lake . Mazinaw Rock is 100 metres high. If you call out, it echos three times - hence the name, "Bon Echo". In French it means, "good echo". I'll agree! I tried it - three times. It's true! Mazinaw Lake is the second deepest lake in Ontario, Canada. It averages 135 feet deep, and its deepest parts are 476 feet deep. Wow! Suddenly, I feel so small. You might want to think about a float for your camera here! If it goes overboard, you'll never find it again. I'll admit - I love rocks. Doesn't everyone?
Read more 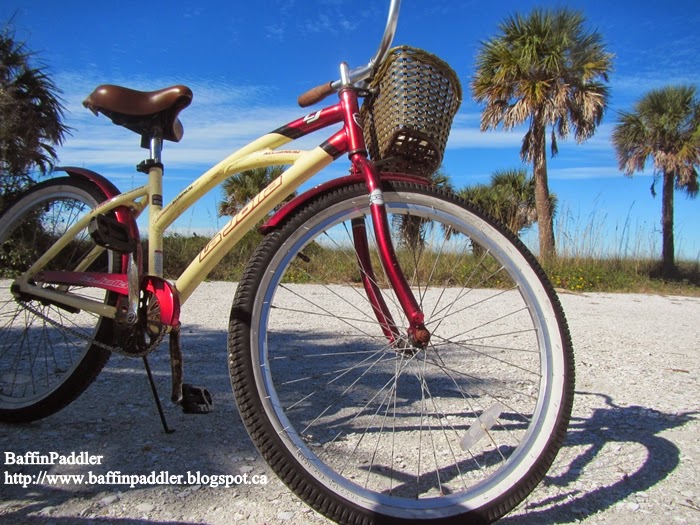 Yes. I felt it. I felt like I was on one of the most beautiful beaches at Fort De Soto. Wow! The big beach cruisers float and roll over the hard sand at low tide so easily. It's a funky feeling. Perched on a wide, overly soft, bouncy seat, holding on to high handlebars with all your stuff packed into a big wicker basket, you feel goofy as you pedal in bare feet or sandals. You know you look goofy, and don't care. It sets you free. Great. It was the first week of January 2014 and we picked the coldest week of the year to visit southern Florida from Canada's deep freeze. It was 34 degrees Fahrenheit (1 Celsius) when we woke up and looked out the patio door of a beach front rental on St. Pete's beach on the Gulf of Mexico, Florida. By noon the temperature climbed to 58F (14 C) according to the thermostat in the rental car. The stiff blowing nor’easter made us think differently. Let's go to Fort De Soto beach . . . in our ski jackets!  Why not. We're
Read more

Does my Ironman Tremblant T-shirt make me look fat? 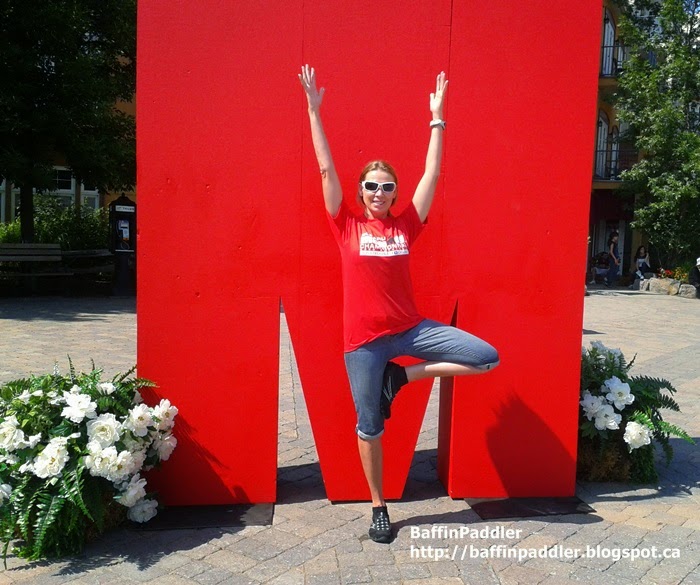 Yes it does. Let's blame it on a bulky belt on the jean shorts. What the hell. This is no time for vanity. I couldn't help striking a yoga pose in from of the big red M in the Tremblant Ironman village today. I call it the Ironman village, because the massive white tents and stages for the event are already set up at the base of the Tremblant resort village. You can already feel the Ironman mania and high energy building in town. Parking further and further away, and taking longer and longer to find a parking lot with space is your first clue! August is a busy month up here! The full Ironman Triathlon in Tremblant, Quebec, Canada on August 17  is fast approaching. It's what I call the totally insane Ironman. The full Ironman - not the half. How this is humanly possible in one day is beyond comprehension. Yet some 2600 athletes from over 50 countries, including Quebec's elite racers, will give it a go. Preparing for a full Ironman takes several years of hard traini
Read more